What does it mean when Blancco File Eraser asks me if I want to erase previous versions of my file/folder?

Previous versions of files and folders are generated automatically by Windows Backup on certain operations and may leave your data recoverable if not processed properly. These previous versions can be used to recover lost data in case it was accidentally modified or deleted. This feature is a potential security risk as sensitive files can be recreated – even if they have been deleted.

Blancco File Eraser can target and erase both the original file/folder and the "previous versions" of it.

By default, when user is starting an erasure for selected file or folder they will prompted with an extra dialog (shown in the below screenshot) asking whether the user wants to include the previous versions into the erasure. Note that this operation requires elevated privileges in order to target all the necessary files/folders. 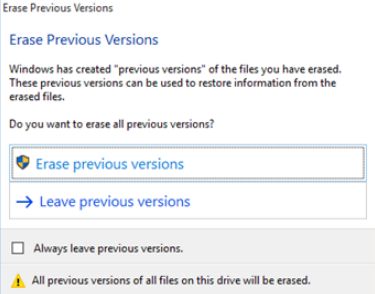