"Erase_mac.command is damaged and can't be opened" error 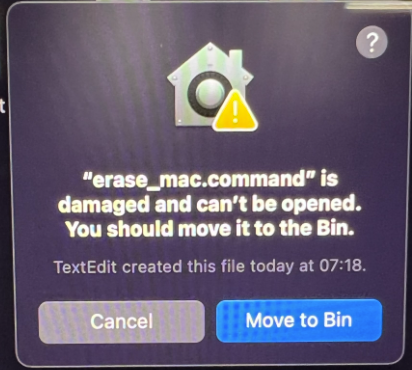 Editing the configuration, such as the erasure algorithm ID or clear NRAM option, within the erase_mac.command file may cause the file to be flagged by the system and cause it being quarantined which leads to the above error message.

This is a security feature within the OS where it detects changes made to an executable file and prevents the execution if changes are saved by adding a quarantine extended attribute to the file.

To resolve the issue the quarantine attribute can be removed from the file, which allows running the script.

Below terminal command can be used to remove the quarantine attribute from the script file.